In light of the passage of the CHIPS+ act and recent news about tensions between China and Taiwan, I’d like to shed some light on microchip manufacturing trends in the US and around the world. The strength of the semiconductor supply chain is a national security issue akin to ensuring a strong US energy supply. The significant role that chips play in everyday life was brought into focus by COVID-era goods shortages caused by a lack of microchips. This catalyzed the US government and private corporations to increase funding of microchip production in the US.

Taiwan Semiconductor Manufacturing Company (TSMC) is the predominant microchip manufacturer in the world (see figures below below) and this has important geopolitical implications. While the US once produced 37% of the world’s microchips, it now produces only 12%, exposing the US to risks if we are cut off from TSMC’s supply. Some analysts posit that in the event of a Chinese invasion of Taiwan, China could shut down the flow of TSMC’s microchips to the US to inflict economic harm. “China could use the disabling of TSMC’s wafer fabs on Taiwan to inflict a heavy blow on the U.S. tech economy, given that all of the U.S. fabless chipmakers, as well as major tech brands like Apple, rely on TSMC for advanced wafer fabrication,” said Craig Addison, author of “Silicon Shield: Taiwan’s Protection Against Chinese Attack.” 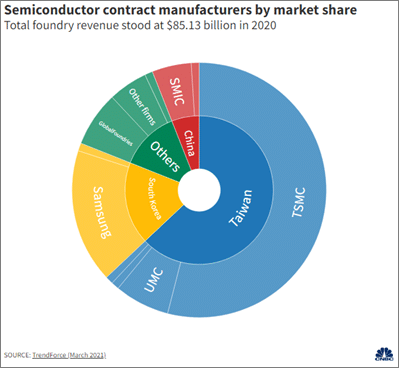 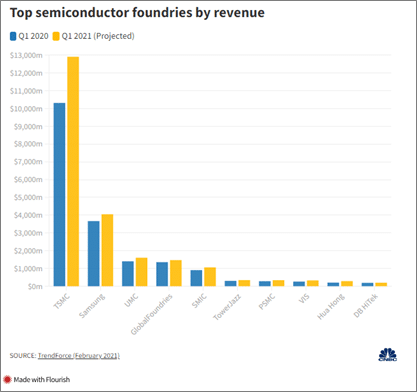 Various government stimulus packages and recent announcements by private industry illustrate an attempt to build a stronger supply base of semiconductors in the US. TSMC, Samsung, and Intel have announced that they will commit $12 Billion, $17 Billion, and $20 Billion, respectively, to build additional manufacturing capacity in the US. The US Government is also working to incentivize microchip production in the US via the $52.7 billion CHIPS+ act passed earlier this year. The Center for Strategic & International studies describes that the act “appropriates $39 billion in direct payment subsidies for expanding semiconductor manufacturing, research, packaging, equipment, and materials capacity in the United States. The act also includes a 25% tax credit for those building semiconductor manufacturing plants or manufacturing the chips themselves.”

The US is not the only nation focused on chip manufacturing; in 2021, the South Korean Government pledged a major commitment of $451 Billion (or 510 Trillion South Korean Won) in aid to the semiconductor industry through 2030 and is also enhancing tax incentives for chip producers.

Questions around future microchip production remain. Will the US be able to compete for market share and talent in this space given the predominance and heightened funding by other nations? Will government financial stimulation result in an oversupply of microchips around the world? What would happen to TSMC’s manufacturing capabilities in the event of a Chinese invasion of Taiwan? The flow of microchips is a political and economic tool being used by the US, Taiwan, and China but only time will tell whether efforts to grow global semiconductor manufacturing will prevent this tool from becoming a weapon.

Peak Asset Management, LLC is an SEC registered investment adviser. This is not an offer to buy or sell securities. Past performance is not indicative of current or future performance and is not a guarantee. The purpose of the blog is solely informational and does not constitute investment and/or tax advice. The information set forth herein was obtained from sources which we believe to be reliable, but we do not guarantee its accuracy.

Get our latest insights

Subscribe to our quarterly newsletter for all the latest news and information about investing and financial planning.